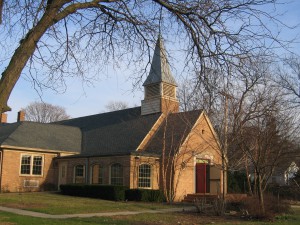 History of St. Edward the Martyr

Founded initially as Saint Edward’s Chapel of Christ Episcopal Church in 1951 as a west side chapel to serve the needs of the expanding population of Christ Church, St. Edward the Martyr grew rapidly. Land was purchased, an American Colonial brick building was built in 1952 and dedicated in 1953, a Kindergarten was established in addition to Sunday School, and by 1957 had achieved parish status and called their own rector, The Rev. J. Wilson Reed. Fr. Reed encouraged the separation of the mission from its founding parish in 1956 in his Annual Meeting address:

“I am disappointed that the St. Edward’s family has not grown more rapidly, but after six months of observation, I am convinced that this will not happen to great extend until the tie between Christ Church and the chapel is broken….and it is well to remember that the work of the Episcopal Church in Joliet will only progress as long as both churches respect each other and live together as fellow heirs of the ‘mysteries of Christ’.”

During these early years, Fr. Peters, curate, assisted Fr. Reed with “a daily schedule for Eucharists, three being held on Sunday, four youth groups, St. Gabriel’s mission plus the usual round of parish administration and calling.” (Howell, Generation to Generation. Pg. 13) In 1965 the current rectory was purchased for $24,500. Under Reed the parish grew into its identity and forged close bonds among its members

Money during these years was a constant concern. The church building was expanded twice to accommodate the growing needs of the parish. Fund raising activities supplemented the pledge income to keep the parish solvent. in 1965, Fr. Reed accepted a call to serve Church of Our Saviour, Chicago, an announcement that stunned the parish. Within a month Fr. Lake was called. He, his wife, and three children moved to Joliet to begin what would be a twenty-five year tenure. To address the continuing financial concerns, numerous fund raising activities became annual events including the Canterbury Faire and the Italian Dinner. Each were popular and effective means of raising funds. In 1977, St. Edward the Martyr became a beneficiary of the Jennings Fund, a trust established by the estate of Mr. and Mrs. Jennings for the support of not-for-profit entities. With monies received, the mortgage was retired and the final addition was made to the building. The church was active with programs and activities for the education of its members. Three young men were raised up to the priesthood: Edward Lindemann, John Blakslee, and Doug Cockbill.

In 1990, Fr. Lake retired. Supported by the interim priest, The Rev. Kempf, the parish called The Rev. Edward Howell to become its third rector. He would serve for nine years. Fr. Howell’s liturgical style tended to the low church end of the scale, taking the parish back to its liturgical roots after Fr. Reed and Fr. Lake’s high churchmanship. During Fr. Howell’s years, the subject of a joint ministry with Christ Church was discussed but no action was taken.